All power to the people 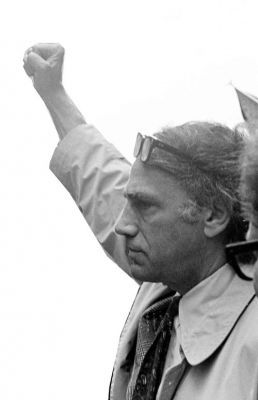 And speaking of lost causes… there’s a fascinating new documentary making the rounds that you might want to keep an eye out for. William Kunstler: Defending the Universe is a sometimes stirring, sometimes confounding but ultimately moving portrait of the iconoclastic and controversial defense lawyer who was sort of the Zelig of the radical Left throughout most of the 1970s. Somehow, he became THE key legal champion for the Chicago 7, The Black Panther Party, anti-war activist Father Daniel Berrigan, the American Indian Movement and the ill-fated inmates who initiated the Attica prison riots.

However, beginning sometime in the 1980s (for reasons known only to himself, or perhaps just merely in keeping with the inherently contrarian nature of a defense lawyer) he slowly but surely turned to The Dark Side (at least in the opinion, and to the chagrin, of many of his professional cohorts and former “co-conspirators”). He started to take on high-profile cases involving clients who were, well, decidedly less sexy to the dedicated followers of fashionable radical chic; terrorists (including the chief planner of the first World Trade Center attack and the man accused of murdering Rabbi Kahane), mobsters (John Gotti and other Gambino family associates), notorious murderers (L.I. Railroad killer Colin Ferguson) and rapists (the Central Park jogger assault case)-to name a couple.

You'll have to scroll down a bit to get to the Kunstler article.... Tom