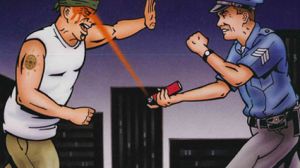 When Lt. John Pike pepper sprayed Occupy protesters at the University of California-Davis last week, many were outraged at a clearly disproportionate use of force in a nonviolent situation. Peter Moskos, a former Baltimore cop turned academic, wrote that even though he'd been trained to pepper spray noncompliant suspects, actually doing so would be "dumb-ass." In nonviolent situations, police officers should simply step in and haul away protesters, he argued: "[T]rying to make policing too hands-off means people get Tased and maced for noncompliance. It's not right. But this is the way many police are trained. That's a shame." The Atlantic's Alexis Madrigal found Pike's actions unsurprising considering that "[o]ur police forces have enshrined a paradigm of protest policing that turns local cops into paramilitary forces."

But that shift isn't just about police departments buying body armor and tanks. It's also reflected in their increasing reliance on "less-lethal" weapons such as pepper spray, weapons designed to ensure submission while minimizing the chance of deadly injuries to both suspects and officers (as well as reducing departments' legal exposure). One industry analyst predicts that the global market for these kinds of weapons will triple by 2020; more than half of the current market is for "disperse" weapons such as pepper spray.