Is a Top US Cop Helping "Reform" Bahrain's Police? 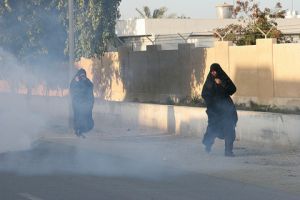 A veteran US law enforcement official recently began advising the Bahraini police, who on Tuesday engaged in another harsh crackdown as protesters took to the streets. John Timoney, fomerly Miami's police chief, agreed in December to join Bahrain's effort to reform its police; a brutal government response to protests there last year included fatalities. The tiny Gulf Kingdom also recruited a former top police official from Britain to help with the process. Timoney has since claimed that Bahrain is changing its police tactics for the better. Tuesday's events cast doubt on that, with protesters once again facing tear gas, stun guns, and armored vehicles aimed at stifling the demonstrations.

The police attempted to prevent protesters from even entering Manama's Pearl Roundabout, the site of mass protests and brutal police response last year. One protester described the use of tear gas to Reuters: "They fired straight at us, they weren't even shooting in the air." Andrew Hammond, a reporter at Reuters and one of the only journalists who covered yesterday's protests, wrote on Twitter that police "chased everyone down road, firing straight at ppl fleeing." Some protesters reportedly threw Molotov cocktails and rocks at police, who arrested at least 25 protesters in Manama. More than 100 protesters were injured. In Shia villages, Bahraini police reportedly even entered homes in hopes of finding protesters. Opposition activist Mohamed al-Maskati described the scene to Bloomberg: "They are storming houses suspected of harboring demonstrators, using tear gas, closing roads and arresting people."