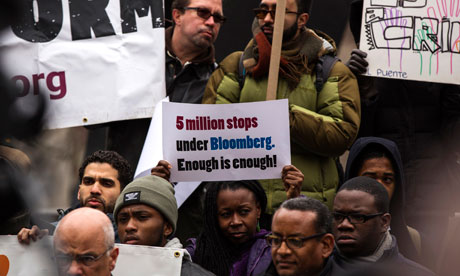 Demonstrators protest the NYPD's stop-and-frisk police outside of Manhattan federal court last month. Photograph: Lucas Jackson/Reuters
The commissioner of the New York City police department views the controversial practice of stop, question and frisk as a means to instil fear in young African American and Latino men, a New York state senator testified in a federal court on Monday.

State senator Eric Adams, who retired from the NYPD after rising to the rank of captain during a 22-year career, said commissioner Ray Kelly described his views on stop and frisk during a July 2010 meeting in the office of then-governor David Patterson.

Adams had traveled to Albany for a meeting on 10 July 2010 with the governor to give his support for a bill that would prohibit the NYPD from maintaining a database that would include the personal information of individuals stopped by the police but released without a charge or summons. In discussing the bill, which ultimately passed, Adams said he raised the issue of police stops disproportionately targeting young African American and Latino men.